Today we’re excited to take you on a tour around Guy and Jules Sebastian’s new kitchen which can only be described as sleek and sexy. With moody black joinery, impressive stone island top, suspended extrusion lighting and more appliances than you can poke a stick at, this luxe kitchen certainly ticks all our boxes!

Before you do an eye roll and think this kitchen is totally out of reach, think again – it’s actually by Freedom Kitchen! Yes friends. So while we may not all be able to afford 923 appliances like you’ll see in this kitchen, we hope you’ll find plenty of design inspo that you can use on your next kitchen project.

After deciding to demolish their original home in the Sydney beach-side suburb of Maroubra, Guy and Jules employed architect Joe Snell to build their dream home from the ground up.

One of the most important aspects of the design was to create a kitchen that suited their ultra-contemporary aesthetic. Function was equally important though, as Guy and Jules needed a kitchen to support their ‘entertainer’ lifestyle and busy life with young kids.

Guy’s brief to Freedom Kitchens was to create a sleek, open-plan centrepiece, in keeping with the style of their new house. And to make it as functional and efficient as possible for their young family. Cue a monochromatic, minimalist kitchen packed with clever storage solutions, loads of workspace, ergonomic layout, and every appliance under the sun.

The couple were set on dark kitchen cabinetry and chose a matte finish with anti-fingerprint properties – an absolute must-have for the couple with their two young boys. To maximise storage, drawers were used instead of cupboards wherever possible.

To flood the kitchen with natural light, an atrium was designed above the island – a key feature of their house design.

One of our favourite features in this kitchen has got to be that butler’s pantry! It houses a barista-style coffee machine, microwave, second sink, and dishwasher to keep the main kitchen space clear. It’s also cleverly positioned to be parallel to the kitchen and has two access points to create the ideal sense of flow and connectedness.

Guy and Jules also chose to include an enviable list of appliances, including a full-sized wine fridge, large French Door fridge by SubZero, two Gaggenau ovens, and a dedicated dry-aged meat fridge. Positioned in view from the main dining space, these elements provide a showcase and talking point when the couple are entertaining.

The main centrepiece of the kitchen is the impressive statement island bench. It was intentionally designed to be as long as possible, measuring a huge 5.6m long and able to seat up to 12 people – the ultimate entertainers island!

With its high ceilings and urban industrial appeal, the couple have ensured this is not only a beautiful, statement kitchen, but a space that is functional and the ultimate family kitchen.

Thank you to Guy and Jules for sharing their sleek, modern kitchen with us. Their kitchen was built by Freedom Kitchen. Keep on scrolling for even more photos of this incredible space. 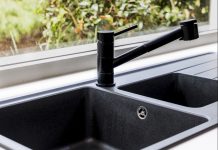 Quartz composite sinks pros and cons: What you need to know about quartz sinks 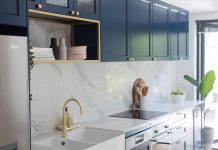 Erskineville kitchen before and after: From poky and brown veneer to a luxe navy blue kitchen