Delivering three rooms (two of them wet areas) in one week is no easy task but didn’t the contestants step it up to deliver some seriously inspirational rooms?!

Let’s take a look at them one by one…

It’s great to see Dea back to her best and that laundry/mud room blew us away! Love the colour of the cabinetry. Love the functionality of the space. Love the styling. love Love LOVE!

We agreed with the judges that the powder room is simply ‘beautiful’. The simplicity of the black round mirror creates a statement in the small space and ties the room together perfectly.

Neale thought it would look better with one less black and white picture… personally we could have done without the framed photos all together in that space.

Their cellar was a stand out and simply oozed luxury. While there were some under-the-breath remarks from other contestants about how on Earth they could afford all that wine, we’ll assume no foul play and just give them a high five for delivering three knock out rooms.

It was one of the closest scores on The Block with Charlotte and Josh, and Tim and Anastasia tied for second place at 27 out of 30.

We were super impressed with Charlotte and Josh this week for showing how to create stylish rooms on a budget. They were clever with where they spent (custom made display racks for the wine) and where they saved (basic tile and cabinetry choices) to create simple, beautiful and balanced rooms.

Big ticks to them for that stunning brushed gunmetal tapware and wall lights in the powder room. We’re also loving the freshness of the laundry and that they worked with a local craftsman to create the feature reclaimed timber shelving in the cellar.

These guys are yet to win a room and we had our fingers crossed that this week would be their week. Unfortunately, some of their finishes let them down and they just missed out.

Tim and Anastasia have certainly moved on from that horrendous bedroom in week 1. The judges said Anastasia is improving her styling execution and has created rooms that are luxurious, functional and have finesse.

This week Anastasia impressed us, mainly because she’s combined materials in her own way. For once we don’t have the feeling that we’ve seen everything in her room before. Hooray! And we have to say, it’s got to be one of the strongest weeks for the couple.

We love the mix of light and dark cabinetry in the laundry and her styling in that space. The dark matt tiles in the powder room give it a moody and luxe feel. For us the cellar felt quite safe and traditional but we wouldn’t complain if someone installed it in our house!

Ah man, these guys are in the bottom spot for the third week in a row and we get the feeling they really needed a pep up this week!

The judges said that although they would never think to select that mosaic in the laundry, it really works and feels glamorous and high end.

We love the timber bench tops and that they offered twice the bench space in the laundry, perfect for sorting clothes. They got points deducted though for overlooking a storage solution for the ironing board.

Their powder room was a much more restrained version of their upstairs toilet and they have continued the use of wood which Neale thinks will become their signature look.

The judges were divided over the cellar with Neale saying he feels comfortable in the space and enjoys the concept and artwork, whereas Shaynna and Neale were not fans of the wire racks or paint colours. Perhaps if they had another $8000 of wine stored in those racks they would have felt quite differently!

What did you think of the cellar, laundry and powder rooms revealed tonight? Do you have a favourite feature? Tell us in the comments below! 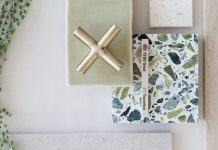 Real terrazzo vs terrazzo-look tiles, what you need to know 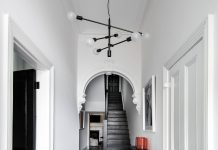 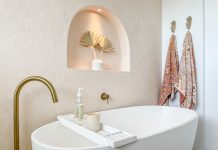 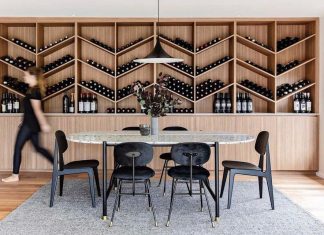