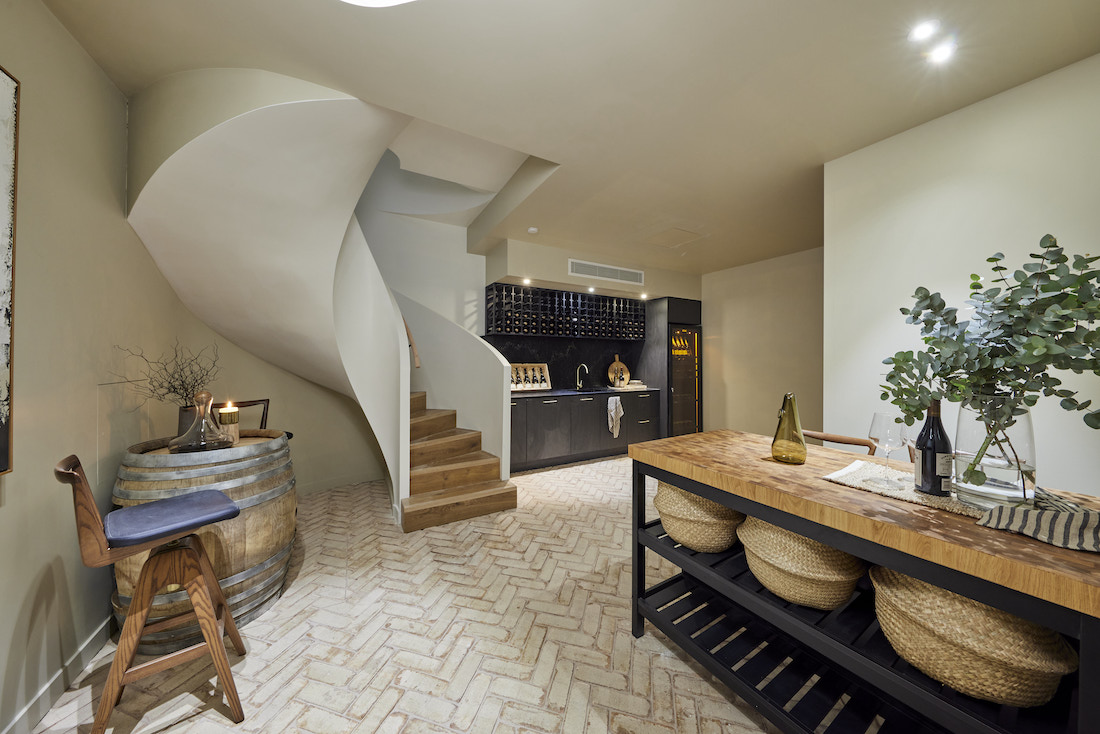 Ok, so we think we’ve changed our mind. No longer are kitchen or backyard week our favourites on The Block. When we heard week 11 would be wine cellar week… yep! SOLD! Haha! But all jokes aside, it was a huge week for the contestants as they completed (well, not everyone finished!) their garage, study and wine cellar with minimal budget left.

Add to that, most teams were trying to finish off the rest of the spaces inside their homes that aren’t judged (and there’s no specific budget for), so there was a lot going on before judging time.

Taking home first place in a mind-blowingly huge week on The Block, was Ronnie and Georgia. When you see how much this couple delivered in one week… it’s just incredible.

There’s a lot to get through, as we start in House 1’s garage. Photography murals are never our fave feature and in a garage… they just seem slightly unnecessary. Every house had one though, so maybe we’re missing a trend or something! However the garage itself had seriously great storage, making clever use of the entire wall and creating one of the most organised garages we’ve ever seen.

We loved the mudroom. It’s such a practical (yet pretty) addition to the home, and in the perfect location being right off the garage. Stylish, with space to sit, stacks of storage above and underneath… it’s a big yes from us. Find our tips to create the perfect mudroom here.

Next we took a look around the study / guest room / home office. And while we are totally drooling over the built-in day bed, can we take a second to talk about that view? What a beauty! Not sure how much work we’d actually get done looking out over that dreamy pool and backyard space.

The spiral staircase… what a feature! Stunning! Leading from the open plan kitchen, living and dining space, the staircase leads you up to a beautiful, simply styled mezzanine seating area. In the opposite direction, the sculptural staircase takes you down to the pièce de résistance… a basement wine cellar. The dream!

The judges were thrilled with each and every space, especially the wine room. They said it was beautifully fitted-out complete with sink, wine storage and fridge, seating around a butchers block table and another powder room. The floors are what did it for us — a thousand times yes.

Style Curator HQ might be moving to Ronnie and Georgia’s house at this rate! Better start saving those millions of dollars to pay for it though 😉

Ohh-kaaay… that custom mural in House 2’s garage gets a firm no from us. The OTT style is pretty standard from these guys but we still aren’t keen! They had simple storage and while we try not to play favourites (no really, we do!), compared to the full wall of storage at Ronnie and Georgia’s house, it felt a little underwhelming.

Off to one side of the garage, Mitch and Mark gave us a home office with room for 2, fitted into ‘stolen space’ above the garage. A clever use of space and sure to get the tick of approval from future buyers.

After they opted for an at-home spa instead of a home cinema back in basement week, Mitch and Mark finally came to the party this week. Their wine cellar was more like a wine room slash home cinema lounge. A wine lounge, perhaps?! We don’t hate the idea, but the execution isn’t our fave.

Something we did love, were the two Prudence DeMarchi artworks. You can read our interview with this talented abstract artist here.

The space also included its own kitchenette, meaning you could watch a movie, make some snacks, and finish off in the at-home spa. Talk about next level luxe!

The judges felt the layout and execution had a few issues. However, they all agreed it’s another value-add to an, “Already stunning home”.

And we also finally got to see that glass floor they talked about from hallway week. We really like how it fills the downstairs staircase with light.

While not something we would have picked, we have to give props to Tanya and Vito on their horizontal opening teal green garage door. With portholes matching the heritage façade of House 3, it was a cool feature that’s very ‘Tanya and Vito’.

Their garage had huge storage space (nothing built in, which we assume was due to budget constraints) but it came at the cost of sacrificing a fourth bedroom. Not sure how that will fare for them come auction day with the judges expressing some concerns (us too!). However storage is always a good idea, and with its access to the backyard and driveway, the judges agreed it would be a plus to any buyer.

Moving downstairs and it’s quirky gone crazy. A basement games room outside the home cinema, complete with an enviable wine fridge and bar area. They included classic arcade amusement games which were cool, but the statue is something we could do without. Darren said the space as a whole was, “…fun, quirky and in keeping with the house.”

Yeeeowch! Check out that score. That’s gotta hurt… Josh and Luke didn’t have the greatest week. It was kind of a disaster (and that’s being kind).

Let’s start in the garage. Because they flipped their house plans, the boys only had room for a single car space. Which for the suburb they’re selling in seems problematic. The garage also had polished floors and a mural featuring race tracks of the world. It was the least offensive feature wall of the lot, but we still didn’t love it! And that door within a door was just weird!

The rest of the rooms were a work in progress (*read unfinished) and the judges were not impressed. Their powder room was mid-way through renos and their study / bedroom was deemed as ‘cramped’ by the judges. Things may have worked better if perhaps they’d reworked the room so the desk was by the window instead of shoved in a corner, and a built-in seating space added where the desk is.

The basement had great wine storage but compared to the rest of the houses, it was only ok. The artworks were cool and added a chic feel to the basement, but can we take a second to talk about that staircase!? It felt so dated. Not fans at all! Simple, pared back timber would have looked much more modern and sleek.

And we were disappointed to see Iron Man was still there, especially after the boys said they might try to sell it to make some cash back! As the judges stated, the space as a whole was unfinished, but at least it’s a starting point.

Coming in second place, Kirsty and Jesse produced some seriously stylish spaces this week. Their garage was simple but well executed with ample storage tucked out of sight. Their garage door had a very Hamptons feel to it — totally fitting the whole look and feel of House 5.

The home office was well-lit with fabulous storage and finally, a mural feature wall we actually didn’t mind! A subtle map of the suburb of Hampton, giving a nod to the home’s location.

Moving to the basement and WOW! Now THAT is a wine cellar! Those Gaggenau wine fridges Kirsty and Jesse received thanks to winning kitchen week were beyond stunning. The wine storage of our dreams. If you’re looking for us, this is where we’ll be!

“It’s a knockout!” Darren claimed. “A balance between opulence and value.” Well deserving of second spot this week.

How did you think garage, study and wine cellar week went? Which house was your fave? And did you agree with the judges comments (or us?!). Chat with us in the comment section below! 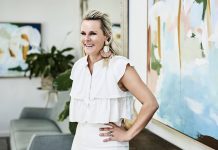 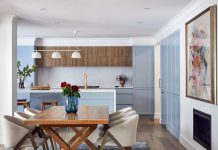 A stunning before and after home transformation: Inside this contemporary Hamptons home 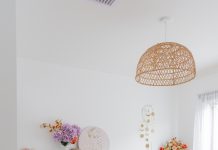 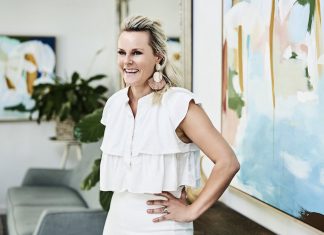 Style Curator - December 3, 2021 0
When we discovered artist Marcia Priestley, we were instantly captivated by her delicate brushstrokes and soft colour palettes. And yet, when we sat down...

A stunning before and after home transformation: Inside this contemporary Hamptons...